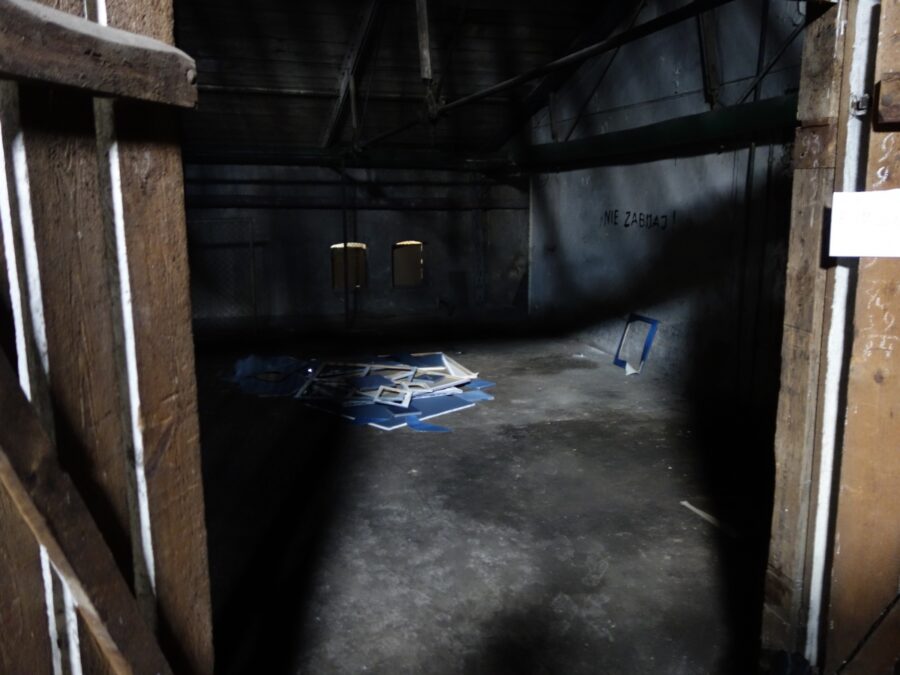 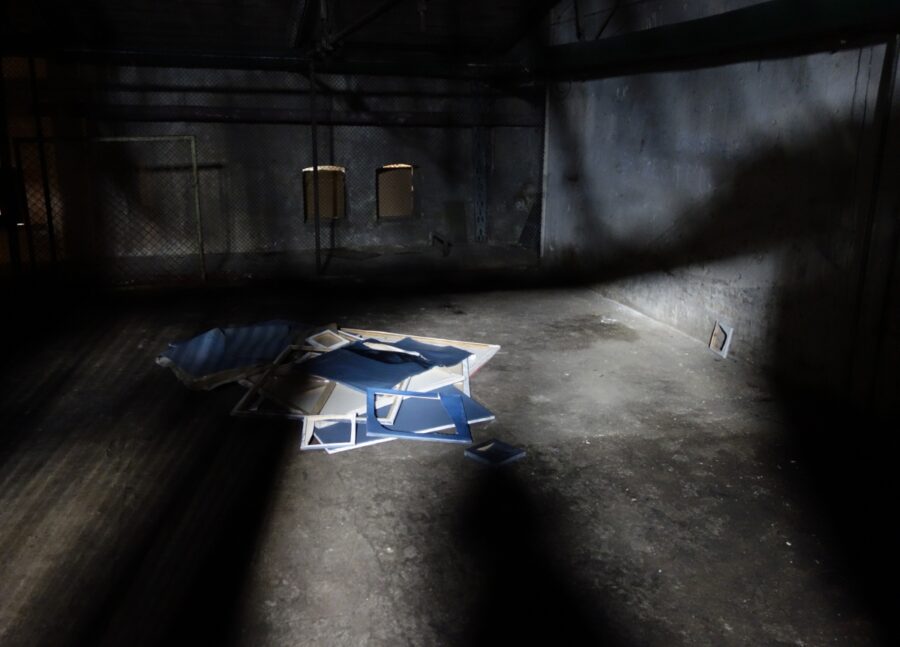 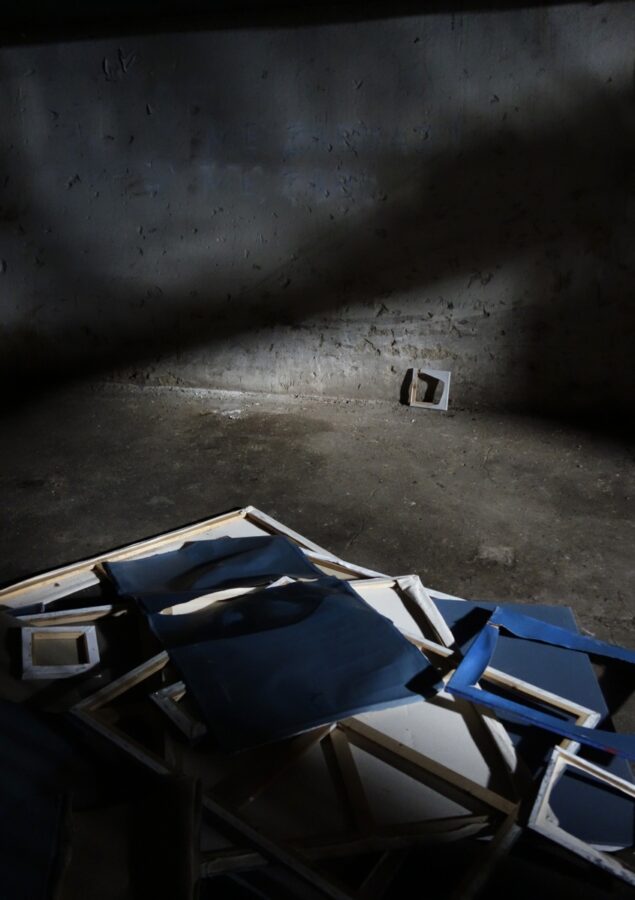 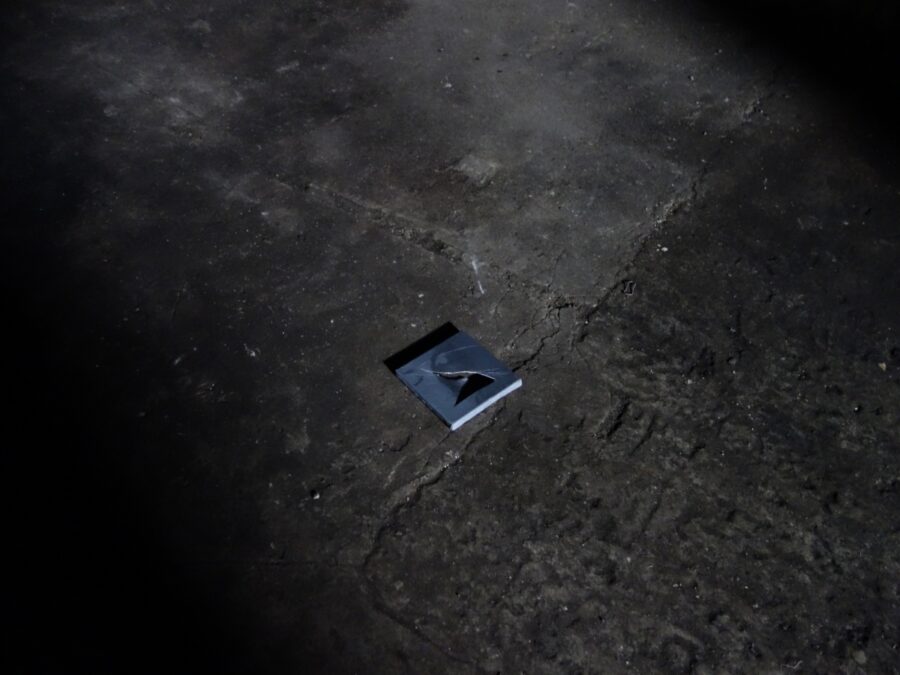 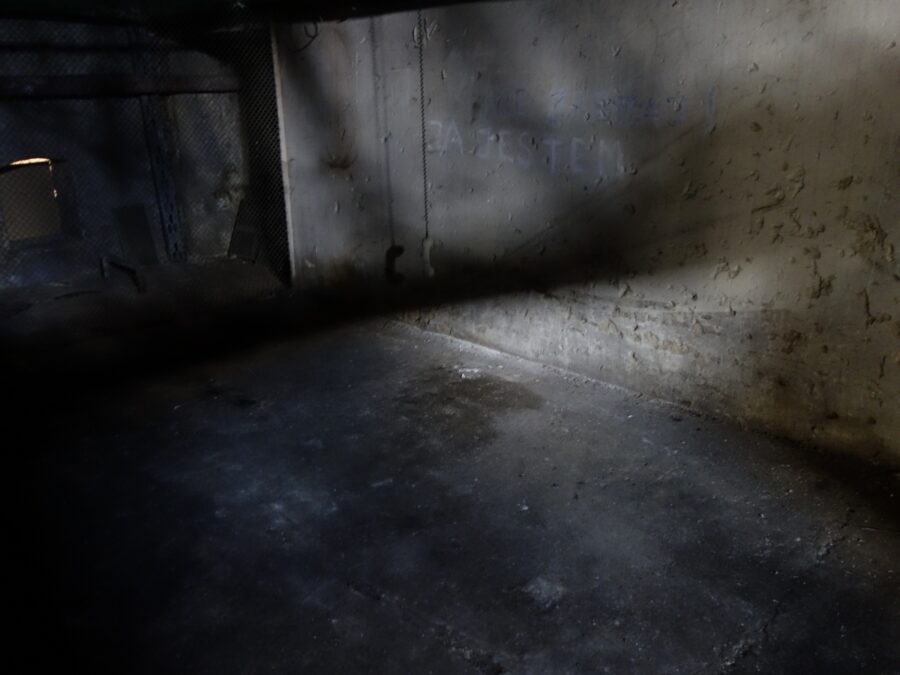 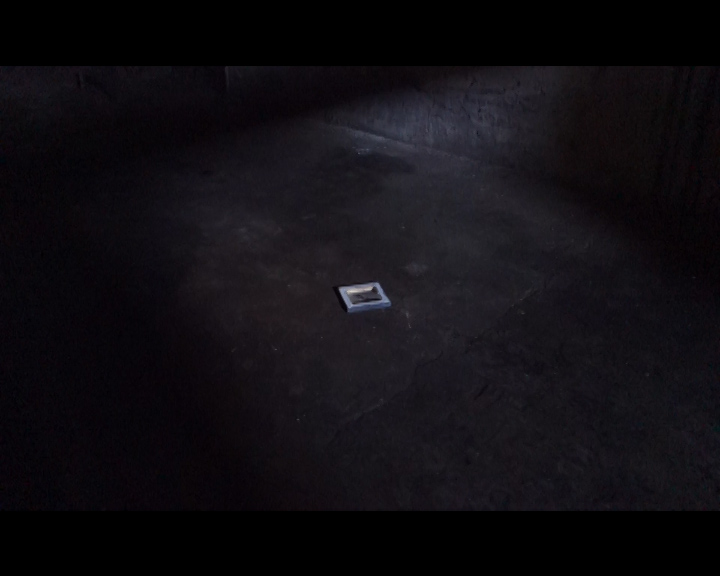 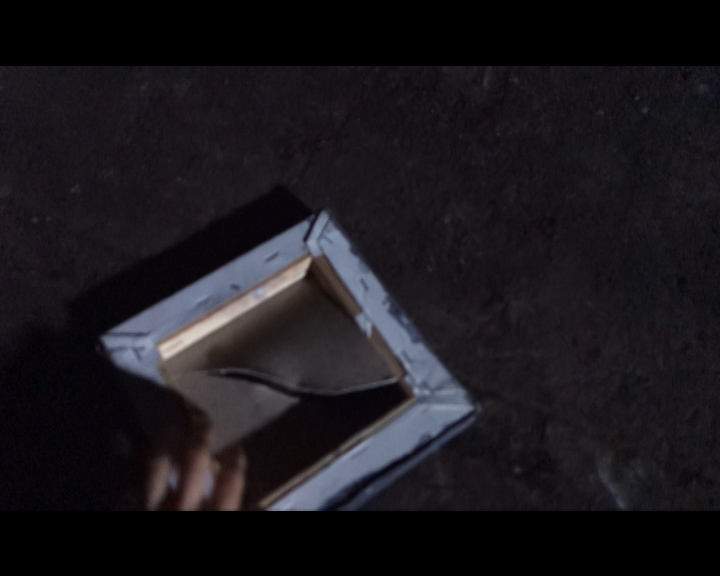 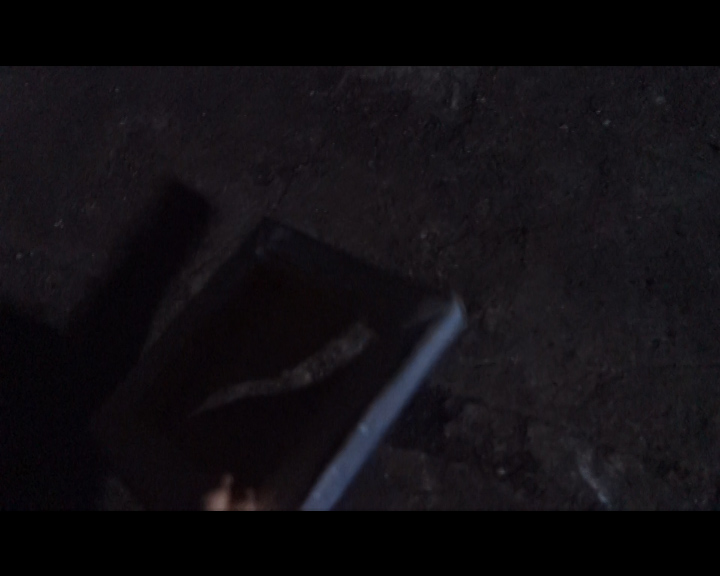 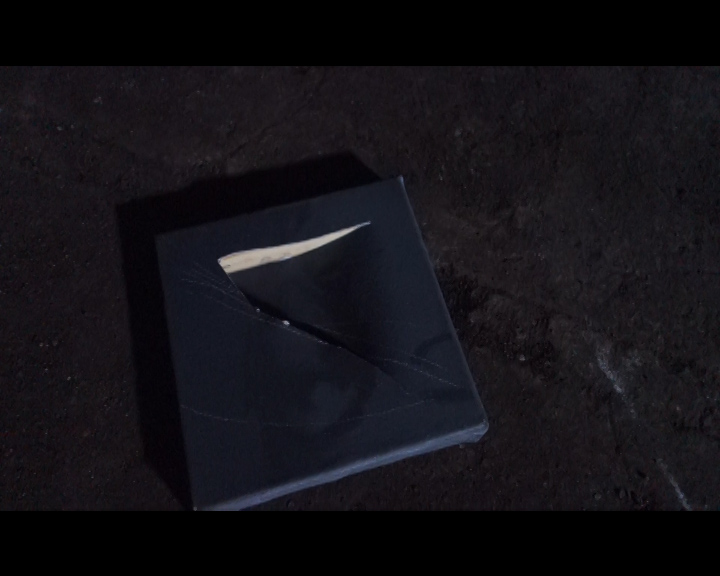 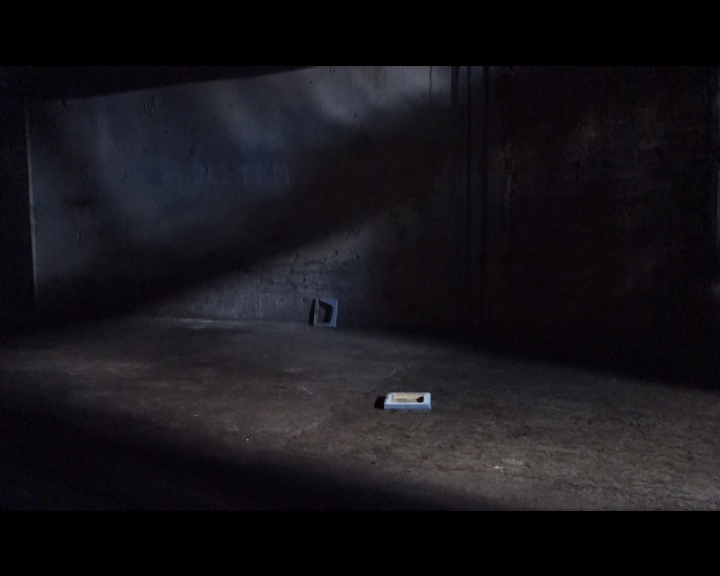 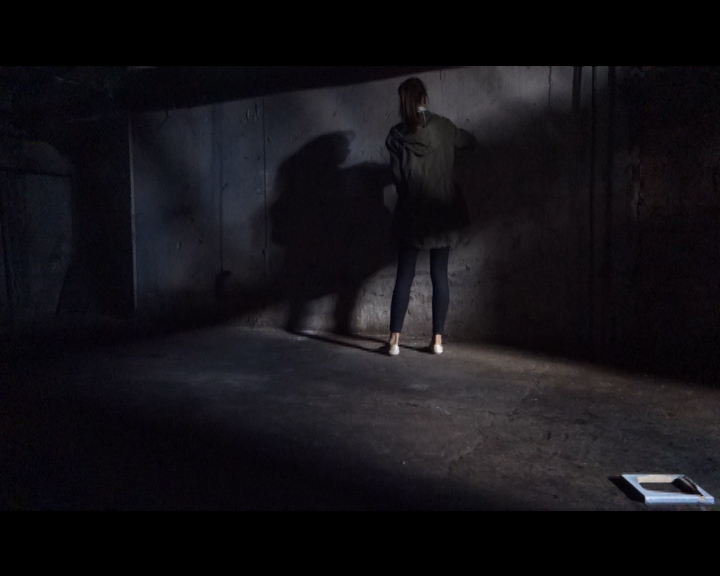 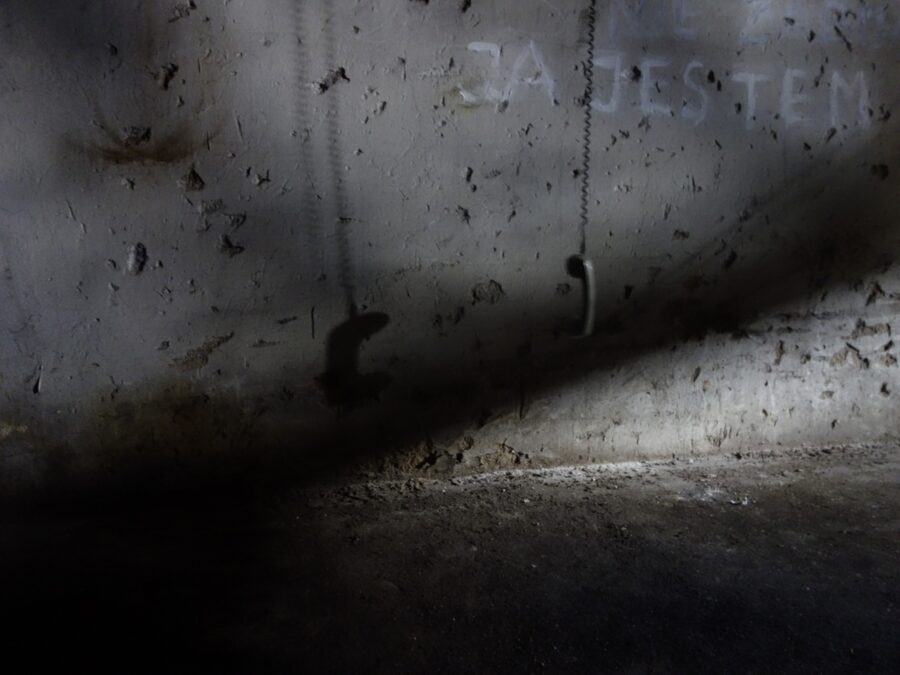 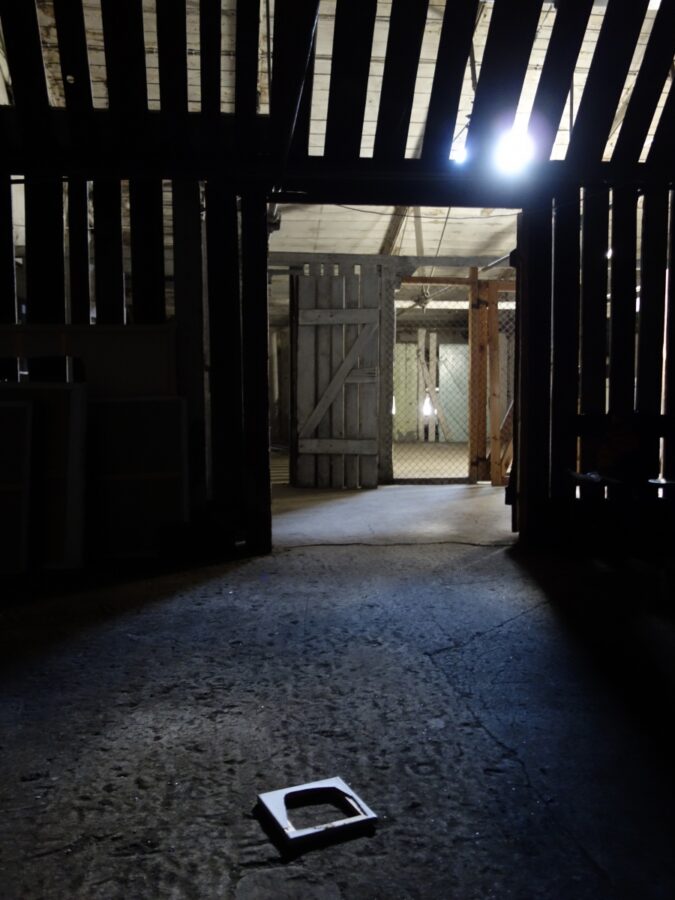 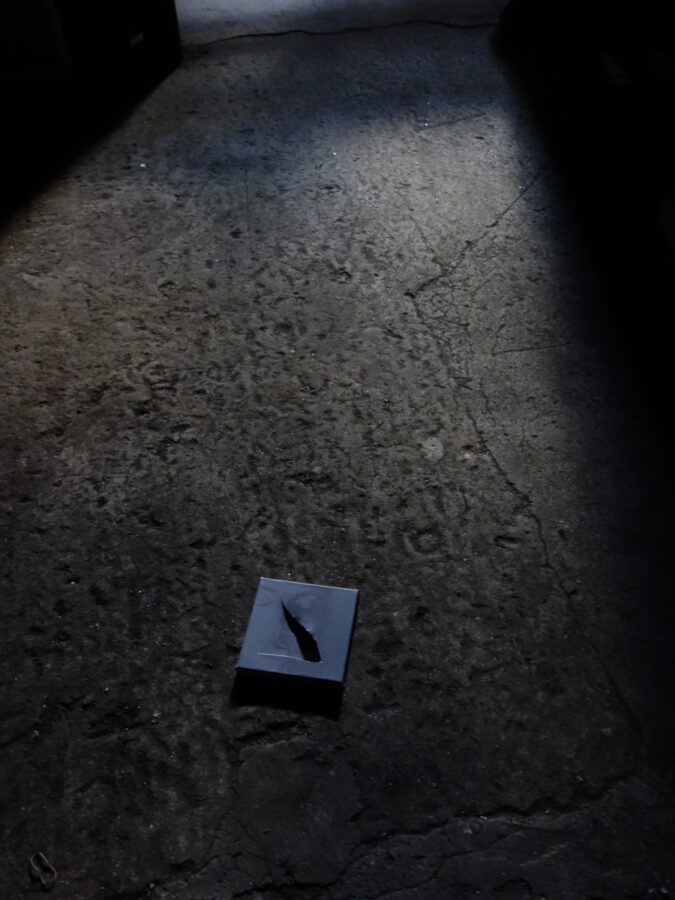 I have cut the canvas, I have carved it out. Now the image is no longer blocking out reality. The void it left behind is filled with a voice.

The voice belongs to a woman. Her words are not a simple message. It is not quite clear what she is talking about or who she is. We don’t know her story. She is talking about love, a meeting, about God and loneliness. Her words are filled with sorrow, grievance, and quiver with emotions. We don’t know who the woman addresses – people or Him; or perhaps she is just talking to a wall; whether He is close to her or distant; whether He is her God, or her enemy; whether He is her curse, demon or love.

The audio work Liberation of a Voice – Liberation of an Image is about Non–Presence. About the absence of God. About my absence in myself which I discovered at the age of 33. The conven-tional thinking about what is appropriate and how we should live, moral and religious stereotypes and hurtful words, not necessarily uttered in bad faith, distort the image of reality, love, good and evil. As small children we already begin to live according to non-good which we trust, and according to non–identity which pretends to be our mirror. The state in which reality is blurred and fiction gains a real shape becomes the accepted pattern. We love what we hate deep in our hearts. We hate the thing to which we would actually like to surrender. It’s impossible to say when we abandon our true ‘self’ which withers: invisible, forgotten, rejected. The thing which is not, becomes the thing which is. The thing which is, becomes nothing. The new world is now the only world we know and remember. Only the longing for something which we cannot name doesn’t let us forget – about what?(…)The decision of making ‘the voice’ public was not easy. The recording wasn’t created with this aim and wasn’t planned. I reached for the recorder to preserve a thought. At the time I was realizing my PhD work Non-Presence. A Mirror as a Reflection and Illusion of Reality. A Return to the Interior. The gray and blue abstract works I painted at the time were a symbol of nothingness and void, an invisible wall separating one from life: an image interpreted as an appearance of reality. I couldn’t paint what I wanted to show – the inside and identity of a human being. When the recording was finished I discovered in it an equivalent of the image I had been searching for. I presented the audio work during the Ghetto XXI exhibition in Łódź* combined with a pile of cut up paintings. The public presentation of ‘the voice’ and inclu-ding it into my art became an act of integration with the sphere of life which had been a taboo area for me. The decision required breaking various ‘you must nots’, both my own internal limitations and comments coming from others:

You mustn’t speak about God. This brings the Church to mind. /an artist/

You mustn’t speak ‘ill’ about God. /a religious person

Art is creation. There’s no art here. You mustn’t do it! /an artist

Stop thinking and start painting. /an artist, professor of Academy of Fine Arts

Art can’t be a therapy. /an artist, professor of Academy

The film Liberation of a Voice – Liberation of an Image was presented during a conference. I made it using the video material recorded when I was creating the above mentioned work. I never perceived either the work or the film as an act of rebellion. Perhaps this is why I went to Zakopane without a prepared speech. However, the conference moved me so much that I decided to show my film. I found it complimentary to many other films which I had seen. I got an impression that it was easy to oppose what we are not internally attached to. It is more difficult when we rebel against what truly and deeply affects us. Liberation of a Voice – Liberation of an Image was not the only work presented at the conference which called into question a certain area of religious life (though it is not its subject matter). Yet it is the first to show the issue of being trapped in religious stereotypes (concerning the nature of God, human beings and morality) from the point of view of a particular individual. In the context of the patriarchal order of the world it is important that this individual is a woman. It is also worth noticing that as a religious person she becomes entangled in yet another stereotype. Liberation of a Voice – Liberation of an Image affirms life and truth hidden in each of us. It is a love story – without one single message and one correct interpretation. It is a symbolic and ambiguous impression. It is a picture – open and undiscovered – like a promise which invites you further and deeper, beyond the limit unknown to me which everyone reaches in their own way.

A text for the conference Not Allowed? Rebellion Against Stereotypes in Various Artistic Attitudes, Zakopane 2016